23ʳᵈ August 2007
Hochtief Construction AG has almost completed redevelopment and extension of the Tectum Tower. The building which was set up at the beginning of the 1970s as one of the first skyscrapers in Frankfurt did not meet today’s demands on fire safety and office equipment. The redevelopment and extension plans of the architects Albert Speer & Partner include a completely new façade and an extension by more than 10 m building height.

Today it is inconceivable to carry out these works without a tower crane. In this field Hochtief Construction AG decided to work with the experienced rental company WILBERT Kranservice GmbH. 20 months  – from December 2005 till August 2007 – a ​WT 200 e.tronic with 123 m height under hook was used on the site.

Although this height under hook could have been reached free-standing, a slender tower with one building attachment in 75 m height was used. A 400 tone mobile crane erected the tower crane to a height of 87 m. Afterwards the required height under hook was climbed up with a climbing device.

For 20 months WILBERT heard hardly anything about the ​WT 200 e.tronic which was the 25th crane that left the production in Stromberg until the disassembly took place in the 32nd week 2007.
WILBERT’s head of customer service Volker Gumm says: “Our ​WT 200 e.tronic ran smoothly over the complete period.” From his side, there was no point to disagree to sending the crane directly from Frankfurt to the next site in Finland.

WILBERT Turmkrane GmbH is a new German manufacturer for tower cranes. In co-operation with the partner company WILBERT Kranservice GmbH a complete service package consisting of sales, financing, hire-purchase, rental, transport, assembly and disassembly is offered to the customers. Both companies belong to the WILBERT group that celebrates its 75 anniversary in 2007.

The Crane at the Site

More about this topic 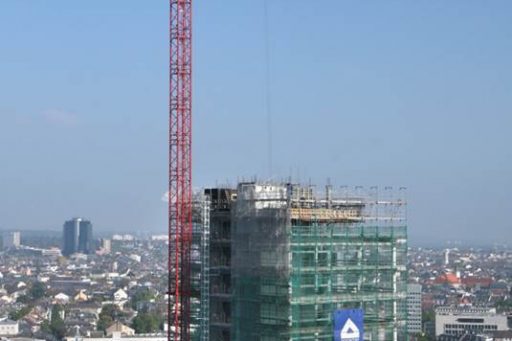